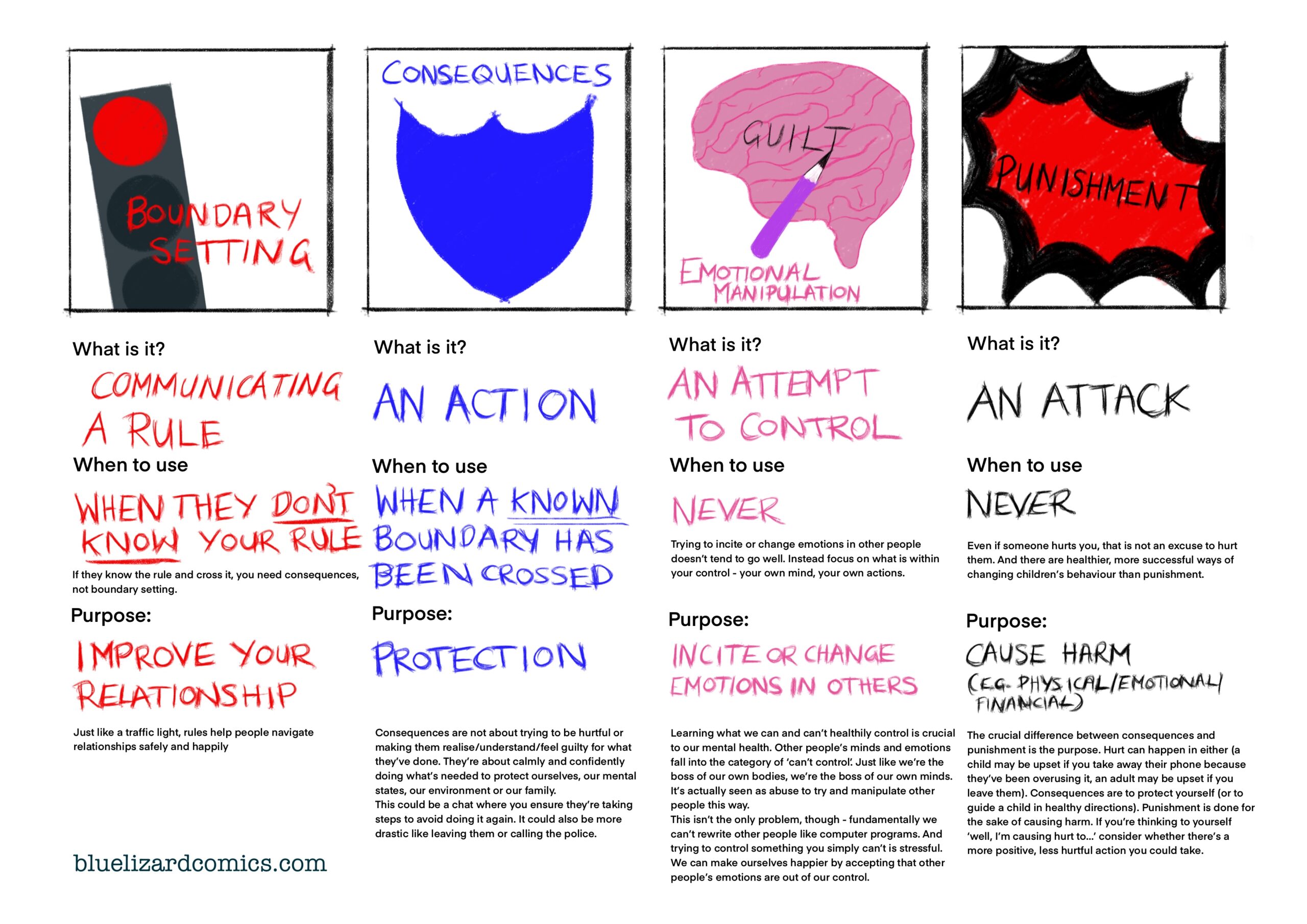 A more serious one here. From lurking on various Facebook groups I discovered that I fundamentally disagreed with many people’s definition of setting boundaries (I also did a much more lighthearted response to it here where Gel Mel, my alter ego, corrects one of the worst of these comments). A lot of times they seem to use it as shorthand for ‘getting angry and having a go at someone’. Yes, screaming at someone will certainly let them know your boundaries, but it might also break the relationship.
This is my take on 4 common terms ‘boundary setting’, ‘consequences’, ‘emotional manipulation’ and ‘punishment’. This illustration shows what I think they are, or at least should be. Note: I’m not a psychologist so do research all these terms elsewhere too.
Here’s the text version:

When they don’t know your rule. If they know the rule and cross it, you need consequences.

When to use it

When a known boundary has been crossed

Consequences are not about trying to be hurtful or making them realise/understand/feel guilty for what they’ve done. They’re about calmly and confidently doing what’s needed to protect ourselves, our mental states, our environment or our family.

This could be a chat where you ensure they’re taking steps to avoid doing it again. It could also be more drastic like leaving them or calling the police.

An attempt to control

Never. Trying to incite or change emotions in other people doesn’t tend to go well. Instead focus on what is within your control – your own mind, your own actions.
Remember – this is true EVEN IF YOU THINK THEY DESERVE IT. A common iteration of this is ‘I think they deserve to be guilty’. Remember that the manipulator is always going to find justification for his or her actions. That doesn’t make them ok. Don’t fall into the trap of thinking your manipulations are ok because the other person ‘should’ feel the way you want them to. It’s fine to tell them how you feel. It’s fine to tell them ‘when you did x it made me feel y’. But just leave their emotional response up to them.

If you’re not familiar with emotional manipulation or want a refresh I highly recommend this article from psychology today. It lists 14 common signs of emotional and psychological manipulation.

Incite or change emotions in others.

This isn’t the only problem, though – fundamentally we can’t rewrite other people like computer programs. And trying to control something you simply can’t is stressful. We can make ourselves happier by accepting that other people’s emotions are out of our control.

Never. Even if someone hurts you, that is not an excuse to hurt them. And there are healthier, more successful ways of changing children’s behaviour than punishment.

Cause harm (this can be physical, emotional, financial or any other kind of harm).

The crucial difference between consequences and punishment is the purpose. Hurt can happen in either (a child may be upset if you take away their phone because they’ve been overusing it, an adult may be upset if you leave them). Consequences are to protect yourself (or to guide a child in healthy directions). Punishment is done for the sake of causing harm. If you’re thinking to yourself ‘well, I’m causing hurt to…’ consider whether there’s a more positive, less hurtful action you could take.

It also helps to reframe. So instead of ‘I’m causing hurt to…’ think about what you want. Maybe you want your 5 year old to stop stepping on your feet (dear god do I ever want that!) or for your partner to stop doing something that really upsets you. Try and step away from the situation and think what would be the best way of making that happen. Usually it means trying something new and positive.