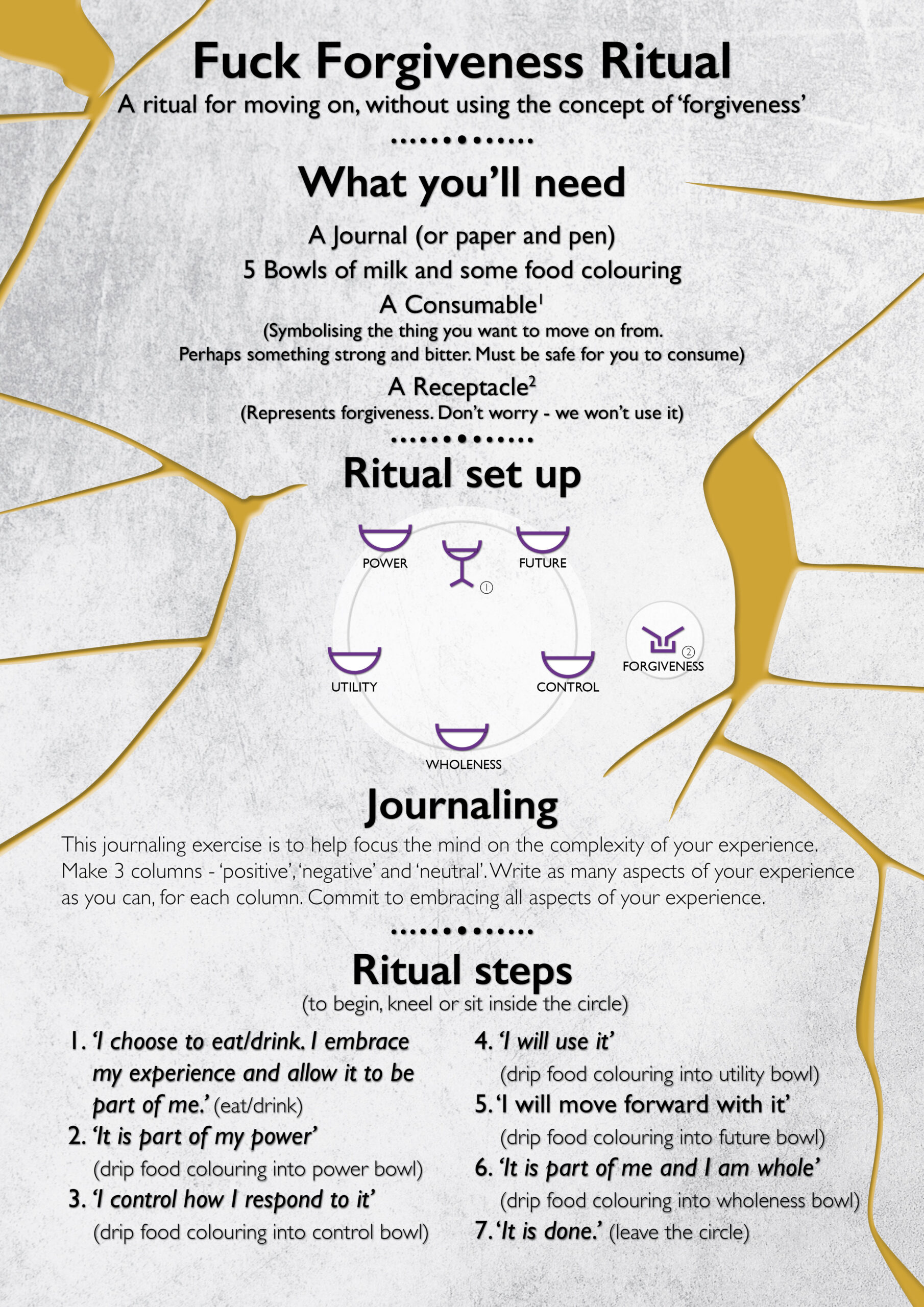 I’ve always had trouble with the Christian concept of forgiveness. You can read more about this in my post about ‘Why I don’t like forgiveness’. When I was growing up, forgiveness is marketed as ‘letting go’. It’s really focused on whoever has harmed you. Well, sometimes that’s just not possible. My personal opinion is that focussing on yourself, and moving forward is far healthier and just more feasible than worrying about forgiveness.

Ritual for moving on instead of forgiving

Forgiveness, for me, holds connotations of trauma, unhealthy teaching, superstition, theism, assumption, expectations and more. That’s a lot of baggage for something that’s supposed to help me.

I created this ritual for myself. It’s a ritual about moving on with life. I used the symbols of personal power, utility, control, future and wholeness, whilst deliberately keeping forgiveness out of my space.

The practice of designing the ritual graphics ended up being cathartic itself. It uses Kintsugi imagery – the Japanese art of repairing broken pottery with gold. The symbolism of our trauma being a source of strength and beauty made sense in the context of moving on.

Ritual circle: finding the sacred in the mundane

The ritual uses a circle a ‘safe space’ for me to work. Everything to do with the ritual is inside the barrier, and forgiveness is left outside. As an avid reader of fantasy, I’ve come across the concept of ritual circles a number of times. The ones that really stuck with me were from the Dresden files and Neil Gaiman’s Ocean at the end of the Lane. In both these works, circles form an invisible barrier.

For years I believed the sacred to be the possession of the church. Something guarded and protected (think Communion – a Christian ritual which must be led by an ordained minister). Being able to create something sacred for myself from a silly fantasy novel was incredibly freeing. Circles of safety resonate very deeply with me. Sometimes our minds’ need that – for us to embrace things that resonate and allow them to be sacred for us.

A ritual circle can be made of anything – string, flower petals, sand etc. You can even just draw a circle on the ground with your hand.

Consuming a symbol of experience

The first part of the ritual involves consuming a symbol of it. Sometimes letting go is impossible; sometimes experience is too strong just ‘forget’ or ‘not think about’. Consumption symbolises allowing experience to be part of us. A bit like Captain Marvel soaking up that raw energy and becoming the most powerful superhero around. For my ritual, I used bread and wine – subverting the Christian ritual of communion. As long as it’s safe to consume, anything can be used.

When I came to perform the ritual, I was planning to use a symbol of one of my traumas. I hoped the ritual would help me move on from it. When it came to it, though, I found that I couldn’t go through with it. I was starting to panic. I felt that I wasn’t ready to ‘move on’ in the way I wanted to and felt that the ritual was ‘rushing me’. My mental techniques weren’t working. Initially, I told myself that I didn’t need to be ‘perfect’ after the ritual – the trauma may still hurt and that was ok. I wouldn’t have ‘failed’ if my mind still returned to it. Although, I knew this was true intellectually I didn’t feel it. I was physically shaking at the idea of performing the ritual for one of those traumas.

I decided in the end to do the ritual using Christianity. Although I have some anger related to Christianity, I have mostly come to terms with it and am able to use it for something positive in my life. In some ways I felt that I wasn’t pushing myself enough. I wanted to use the ritual to help heal, but it didn’t go that way. This ritual ended up being more of an ’emotional marker’ for me. Most of the healing came from creating it, not doing it.

I want to talk more with people who have more experience of ritual than I do. I’ll be honest, it was a little bit of a head-fuck for me. There’s a line between using ritual to mark a point of healing and using it to actually facilitate healing. I haven’t got my head around exactly what that means yet. Something to explore.

Anyhoo, onwards. Christianity was probably about the right level of trauma for this ritual. Still some anger there, but nothing that would send me over the edge.

When I first created the ritual I expected to go straight into the circle and begin. However, I hadn’t anticipated how complex and ingrained trauma is into our experience. It felt…big. Too much to tackle. Journaling is popular in other rituals, and I could suddenly see the sense in it. I took my journal and created three columns – positive, negative and neutral. Then I wrote down everything I could think of about Christianity. It helped calm me and get my head around the complexity of my experience. Including the positive also helped me get into the mindset of ‘moving on’ vs ‘letting go’.

Once I was ready, I stepped into the circle. At this point, I left the circle partially open – my ‘safe space’ wasn’t closed yet. I placed the forgiveness receptacle outside my area, with a certain satisfaction and then closed the circle, using silver thread. I had milk and 5 bowls with me – I poured milk into each bowl, placing them in position and saying their representative word; power, control, utility, future, wholeness. Then, saying the ritual words ‘I choose to eat and drink. I embrace Christianity and allow it to be part of me’, I consumed bread and wine as a symbol of my Christian experience.

It wasn’t an accident that the first words of my ritual were ‘I choose’. Because often this choice was the thing that was taken away from me as a Christian. So much of Christianity is about bondage to an arbitrary authority or the ideas that go with that. Everyone knows about the barriers to particular action, but there are mental impediments too. You try and think through something logically but you have to factor in what the Bible says, what ‘Christianity’ says, what ‘God wants’ or even that God must exist. It’s exhausting. For me, atheism represents freedom – freedom to follow logic and reason, to live and think the way I want without arbitrary barriers.

Sin as a stain on innocence

When I was a child, my Church loved using visual metaphors for the various dogma they wanted to instill. Many of these centered around the idea of sin being like a stain on the innocent human (sex before marriage was also visualised like this). I watched clergy and other speakers drip ink into liquid, pour paint onto white sheets, stain the white t shirts of fellow parishioners.

I’m a hugely visual person, so this imagery did what no amount of second rate dialectic could – it got into my brain and stuck there. When I first had sex before marriage I felt dirty. I literally imagined myself as one of those white sheets, now with an irremovable blotch.

As this had been such a powerful image for me it felt right to use it for my own purposes. I took food colouring and dripped it into each of the 5 bowls, saying the ritual words at each stage. Subverting this Christian image in a visual, experiential way and for my own purposes was incredibly powerful. It’s empowering to use Christian symbols that I’ve grown up with but without the superstition.

To me, the act of dripping food colour into milk symbolised that we’re not supposed to remain pure and untouched. We’re human and need to live. That doesn’t mean something’s wrong – our experiences make us colourful and interesting. By the end of the ritual I had 5 white bowls, with splashes of colour in each. I took a moment too look at the different shapes and patterns I’d create, and appreciate how fun and different each one was.

It’s important to end rituals properly. With ritual we’re working with the mind. As an atheist, I don’t believe in anything supernatural or superstitious. But I do believe in the entirely scientific field of psychology. And psychologically, the format, gravitas and attitude to a ritual all add to the experience and make it more powerful. I chose to close my ritual with the very commonly used words ‘it is done’ and at the same time ‘broke’ my ritual circle. Time to move on.